The RHA recently organised a demonstration day for the Eco-Link B-Double on the 25th May. The aim of the day was to drum up interest and support from leading hauliers, and it was a success. The trial was attended by industry leaders including Eddie Stobart Ltd, Tesco, Menzies Distribition and many more.

Afterwards we invited all attendees to try the course out for themselves. From novice LGV drivers to experienced ones to car license holders, all attendees commented on how easy the Eco-Link was to manoeuvre and drive. There was huge interest from all parties for the Eco-Link to be road ready. Many attendees commented about how the vehicle could improve productivity and reduce cost in their organisation with many commenting on reduced man hours, cost cuttings and increasing economies of scale, and many stating ‘there is no reason why it shouldn’t be on the road’.

One of the questions the Department wanted to know was the level of support from the transport industry for this type of innovation. This is why we are so grateful to the RHA for organising the demonstration event and everyone who attended the day.

Last week Dick Denby wrote a letter to Baroness Vere and other members of parliament asking for clearance to conduct road trials of the Eco-Link combination trailers. Dick explained that the organisations who attended the trial represent at least ten thousand vehicles, and he believes this is a serious statement of industry engagement.

RHA Managing director of the RHA Rod McKenzie said: “The success of the recent trial, and the enthusiasm of operators, is proof positive of the potential benefits that Dick Denby has long argued for. It’s now time for the Government to act in supporting this ingenious vehicle."

The B-Double started its journey in 2001, when Dick Denby had an idea about how to improve vehicle productivity. He was inspired after seeing ‘B’ doubles in South Africa. For almost 20 years we have been pressing the department of transport to allow trials of this vehicle on the highway. There are a number of ways in which they could have facilitated this, e.g section 44 permit. We have consistently had a sympathetic reaction from the Department of Transport but no action. On the 1st December 2009 we sought to force the issue and having given ample notice to all interested parties we drove the vehicle on the road for 100 metres before we were stopped by the police and returned to depot.

The Eco-Link is a 25.25m long, 60-tonne gross weight road train, the rear trailer is a conventional 13.5 metres trailer and the interlink trailer has a loading platform of 7.82 metres. Which would allow operators a massive increase in efficiency if approved for use on the UK's roads. It would also provide impressive environmental benefits, allowing more freight to be moved by fewer tractor units. 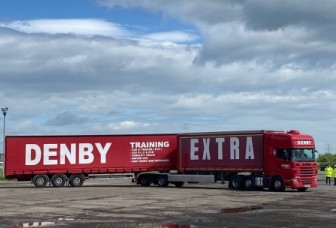 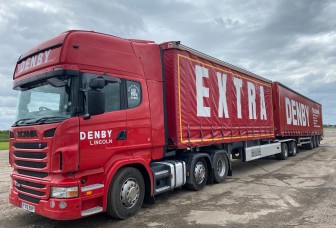 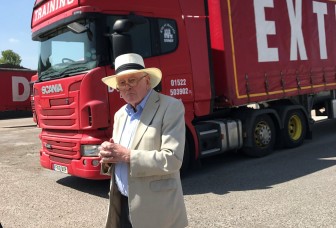 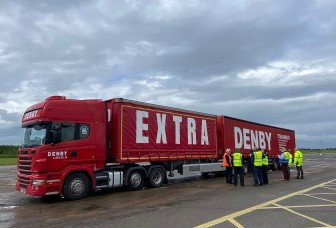