I am often asked what the government is doing about high productivity lorries. If asked, the Department for Transport (DfT) will reply that,  “the government will not consider trials for the time being”. This Ruth Kelly policy was apparently confirmed in the early days of the present government in June 2010; this is not the full story thankfully!

Last month Mrs. Louise Ellman, M.P. Chair of the Transport Select Committee, wrote to the Minister in concern asking what their policy is for high productivity lorries and in particular, what plans they have for trialling such vehicles.

This is timely because ministers now have early experience of the trials of longer semi-trailers which have 15% extra cubic capacity compared with today’s standard lorry. Cube is the priority for our supermarket traffics which have more packaging and air than actual goods. Trials have not gone well but against 15% gain the ‘high productivity’ lorry offers 57% gain. Yes, four fold. Furthermore, the ‘high productivity’ “B” Double has free circulation in other EU member states and without the safety problems associated with the longer semis. Indeed, it is safer than today’s standard truck. With modern technology this truck will require no highway modification. Any expense falls on the operator, not the tax payer.

Click here for further reading on our own Eco Link trailer (featured above).

Or, to see the important work going on in Cambridge University under Professor David Cebon, go to the Cambridge Vehicle Dynamic consortium: See their website. The Cambridge team are world leaders in this field.

Not much can be done until Mrs. Ellman receives a reply from DfT, which we hope will be published. This time I do hope ministers will be told that the “B” Double is more stable than today’s standard artic and, important to the rail lobby, that the fleet of 1,000 LHVs (Longer, Heavier Vehicles) running in the Netherlands has taken all its traffic from the standard lorries and nothing at all from the Dutch Railways.

In short, the ‘High Productivity Lorry’ is: SAFER, CLEANER AND CHEAPER. 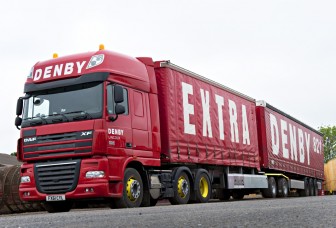