Outside the west front of Lincoln Cathedral the #lincolnlorry was launched.

Outside the west front of Lincoln Cathedral the #lincolnlorry was launched. It had been almost a year in the planning. The original idea came from the view from St Hugh which had been on the southside of the Cathedral and we thought it would look good on the side of one of our lorries.

The vehicle will be travelling far and wide across Europe where the stunning image of Lincoln Cathedral and its surrounding area will be seen by many. The Cathedral was restored in the twelfth century by St Hugh who hailed from Avalon a small town near Pontcharra in the Rhone Alpes. The image on the side of the lorry shows St Hughs restoration in all its splendour, with his statue  that sits on the Cathedrals southwest Turret. The image also shows the world famous Red Arrows flying over.

The aim of the project is to take Lincoln into Europe and hopefully to attract visitors to this famous Cathedral City of Lincoln.

Read more on The Lincolnite 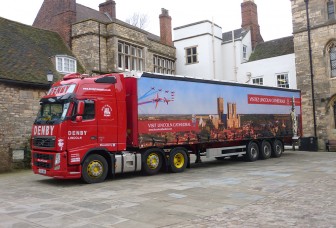 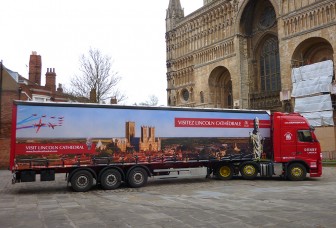